The standing stone at Westerton is situated along the B9113 approximately 5 miles from Forfar on the way to Montrose, near to a cross roads for Pitkennedy and Letham. It sits in a fenced enclosure around 100 metres north of this junction on the left hand side.
The stone is approx 1 metre in width by 25cm in depth and has a height of approx 1.4 metres.
It features cup marks on the top edge and an incised figure in the south west face. 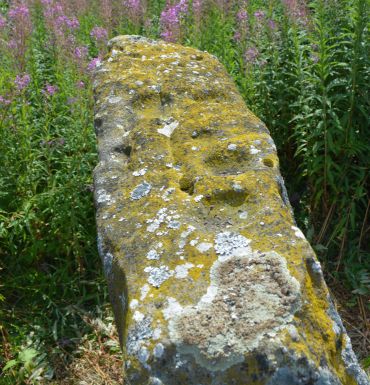 James Young Simpson, known more for his work as an obstetrician and his pioneering use of chloroform in childbirth; had an interest in rock art and stone circles, he visited Westerton in the 1866 and made the following note:-

"Circle of Turin, Forfarshire.- On a large erect stone which once formed one of a fine circle of boulder stones at Nether Turin, my esteemed friend Dr Wyse discovered "several carefully excavated cavities upon its top in groups, without circles."".
The afore mentioned Doctor Wyse being Thomas Alexander Wise MD, who had a fascination for rock art from around the world, most notably Asia. He went on to write and publish "History of Paganism in Caledonia" in 1884.

It is interesting to observe that J. Simpson mentions the stone as being part of a former stone circle. There appears to be no surviving record of such and any indication of a circle at the site has long since disappeared.

During their visit no recording or documention of an incised figure had been made. It was not officially recorded until March 1978. This occured as part of a survey by the Society of Antiquaries of Scotland's fieldworkers along with the Central Excavation Unit of the Scottish Development Department. The details of which were published in the Proceedings of the Society of Antiquaries 1982.
It had been noted, much like today, that a great deal of the stone had delaminated meaning the figure is only partially visible. It was also noted that the incised grooves are between 5mm and 15mm wide, with a depth of approximately 7mm. This in part makes the figure hard to visualise from a distance as the lines are not clearly defined, the overlying lichen growth also hinders observation. However, it is possible to observe these grooves if viewed close up, and they can be traced by running a finger along them. 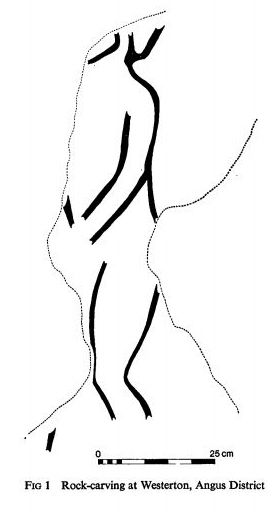 The outlined image, possibly that of a Pictish warrior is positioned in an upright posture facing towards the right, the left arm comes across the body being bent at the elbow. Part of the head and jaw is also visible, unfortunately the process of erosion has taken its toll and a great deal of the figure is missing.

The pose of the figure, combined with the placement of the left arm, and the shapes made by the surviving stone, have caused a pareidolia effect to be perceived in the groin area, this in turn has led to some lewd and suggestive stories, which shall not be discussed here.

In 2017 a large monolith was excavated at Tulloch near Perth, during road construction. Incised upon this stone is a figure which is in similar pose. The figure is 1.2 metres tall, facing towards the right, with the left arm in almost the same position, an exception being that the Tulloch warrior is carrying a spear with the right hand. 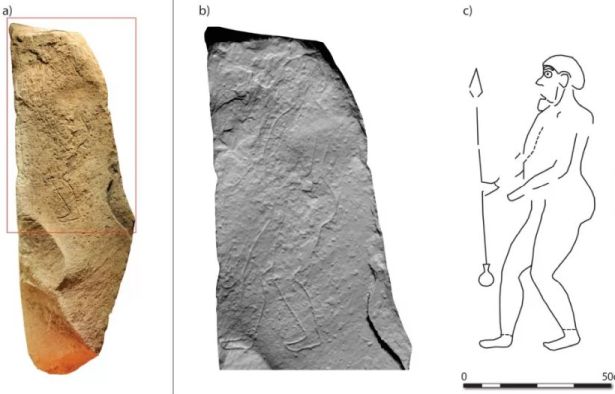 As can be seen, by comparing the above line drawing with the one from Westerton, various portions correlate between the figures. As to what the Westerton figure may have been carrying is open for conjecture. It may have also been a spear, or the hand position may indicate a warrior grasping the hilt of a sword.

The following set of images were made using reflectance transformation imaging. This is a process that involves the use of a fixed camera and a movable light source, a reflective surface and some clever software to enhance detail that is not immediately visible to the naked eye.

The first image shows the initial set up of the equipment, with the second image being a close up of the area to be scanned. 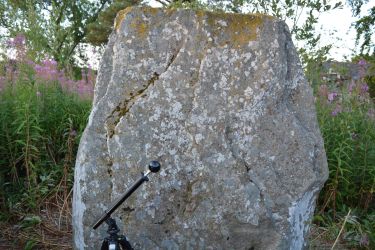 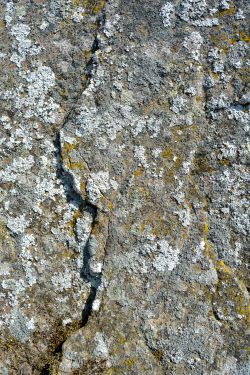 Area to be scanned, parts of the figure are just visible. 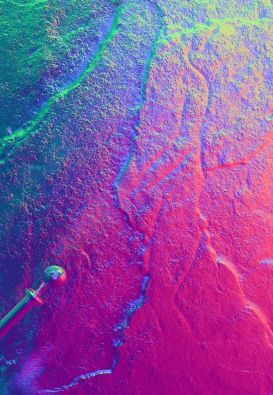 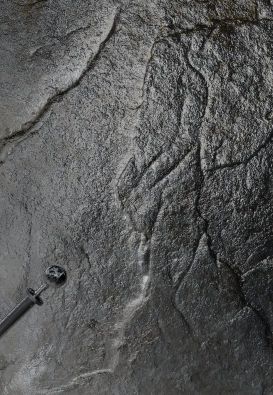 The outline of the figure can now be seen with much more clarity, unfortunately no additional detail has been revealed. Due to delamination which has affected the area to the left of the carving, the surface layer is now absent to a depth greater than 10mm, meaning even faint traces are not visible in the results. The rock surface appears to be relatively stable at the moment, however once water and frost begins to work its way between the sandstone layers, it will only be a matter of time until the remaining portion of the figure is lost forever.

The Canmore database entry for this stone can be found here

Further reading with regards to Reflectance Transform Imaging can be found here.

Barclay, G.J. & Halliday, S.P., “A Rock Carving from Westerton, Angus District,” in Proceedings of the Society of Antiquaries, Scotland, volume 112, 1982.

Simpson, J.Y., “On Ancient Sculpturings of Cups and Concentric Rings,” in Proceedings of the Society of Antiquaries, Scotland, volume 6, 1866.